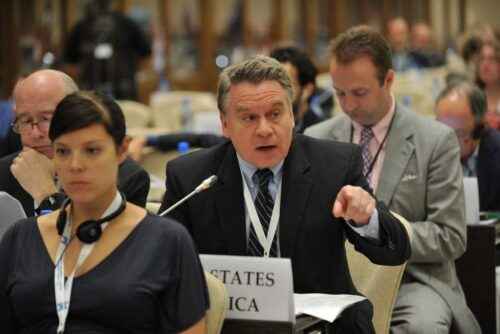 Pledging to ‘ramp up scrutiny of those who are aiding and abetting the Communist regime,” Rep. Christopher Smith (R-Manchester) will serve as chairman of Congressional-Executive Commission on China.

“Now more than ever, we must boldly stand up to the Chinese Communist Party and its ultimate desire for global dominance before it’s too late,” he said.

The chairmanship alternates between the Senate and House every two years. Smith was picked for the post by House Speaker Kevin McCarthy.

Smith, who has led 76 separate congressional hearings on human rights abuses in China, promised to “aggressively counter the transnational repression of Xi Jinping’s brutal dictatorship and ramp up scrutiny of those who are aiding and abetting the Communist regime.”

“The CECC has been instrumental in advancing critical legislation—including two laws I coauthored, the Hong Kong Human Rights and Democracy Act and the Uyghur Forced Labor Prevention Act—to hold the Chinese Communist Party (CCP) to account for its heinous atrocities,” said Smith.

A senior member of the House Foreign Affairs Committee, Smith had previously served four terms as chairman of the commission and four terms as ranking member.

“Ever since President Clinton delinked human rights and trade with China nearly three decades ago, most US politicians and corporations have enabled the Chinese Communist Party through unfettered engagement and trade without serious human rights protections,” Smith said.

Smith added, “For far too long, the vast majority in Congress and certainly in the business community and foreign policy establishment have bought into what James Mann rightfully called ‘the China Fantasy,’ naively believing that if you just trade more with a dictatorship, then somehow it will matriculate into a democracy.”