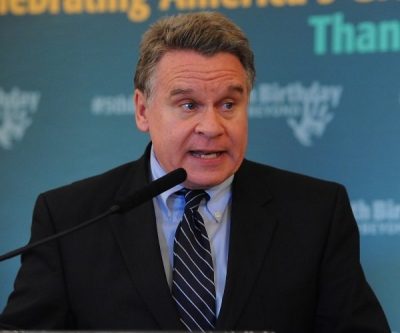 When Rep. Chris Smith, R-N.J., called last week for Russian President Vladimir Putin to be indicted and tried as a war criminal, the immediate reaction in Washington D.C., was: “This is preposterous!”

Since neither the U.S. nor Russia are among the 123 countries that belong to the International Criminal Court (ICC), sniffed the skeptics, there is no way Putin could ever be brought before the bar of justice.

“But I’m not calling for Putin to be tried before the ICC,” Smith told Newsmax on Monday evening, “I’m going to advocate that Congress calls on the United Nations to create a ‘hybrid court’ — that is, a special court dealing with cases of genocide and war crimes in a particular country or region.”

Smith, who is a senior Republican on the House Foreign Affairs Committee and known as one of the most passionate human advocates of human rights in Congress, cited the United Nations Resolution 827 passed in May of 1993 and the International Criminal Tribunal of the Former Yugoslavia (ICTY).

More than 161 individuals were indicted and tried by the ICTY for genocide or war crimes over the last 24 years. Among them was former Yugoslavia President Slobodan Milosevic (who was on trial for war crimes when he died in 2006) and former Republic of Serbia President Radovan Karadzic (the so-called “Butcher of the Balkans,” who was convicted on 10 counts of genocide, war crimes, and crimes against humanity).

A similar court, the Special Court for Sierra Leone (SCSL), was set up by the UN in 2002 to “prosecute persons who bear the greatest responsibility for serious violations of international humanitarian law and Sierra Leonean law.” The best-known defendant in the SCSL was former Liberian President Charles Taylor, who in 2012 became the first former African head of state to be convicted of war crimes.

Smith told Newsmax he envisions an international panel similar to the ICTY and SCSL with the goal of trying Putin and colleagues in the Kremlin involved in the invasion of Ukraine.

The New Jersey native plans to have David Crane, onetime chief prosecutor of the SCSL, testify Tuesday morning on the feasibility of such a tribunal before the Lantos Commission (a bipartisan commission of Congress that deals with human rights violations).

But David Crane noted that it is “not outside the authority of the General Assembly” to create a hybrid tribunal without first going through the Security Council.

“They created the International, Independent, and Impartial Mechanism for Syria that now sits in Geneva,” said Crane, “As an important aside, a mechanism for Ukraine is also an appropriate option.”

Whatever the process or the venue to create the desired court, Smith told Newsmax, “We’ll find a way to get this done. Failure to do is gross negligence.”