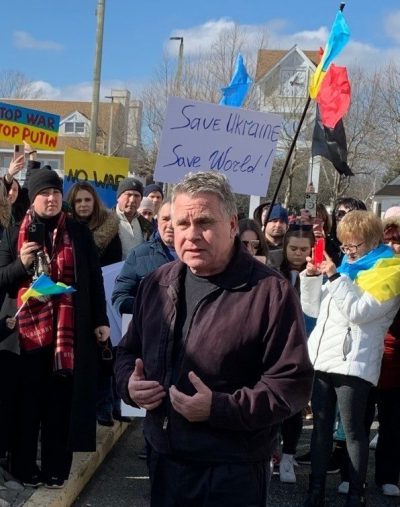 EEHOLD — At a rally outside his Freehold office on Saturday, Rep. Chris Smith (R-NJ) joined approximately one hundred Ukrainian-Americans whose family members and friends are in grave danger as Vladimir Putin ruthlessly invades their nation and slaughters innocent women, men and children.

Smith, who met with the organizers of the rally in his office, said that President Biden’s disastrous exit from Afghanistan likely enabled Putin to pursue such aggression and called for immediate and strong international support for the people of Ukraine in their fight against the Russian dictator.

“Now more than ever, the United States and our allies must provide much-needed military equipment and humanitarian aid to the courageous people of Ukraine as they courageously and tenaciously fight to defend their freedom from a brutal dictatorship,” said Rep. Smith.

“Comprehensive sanctions must degrade Putin’s capacity to wage war,” said Smith.  “Putin—and other Russian leaders responsible for these crimes against humanity—must be prosecuted as war criminals.”

Smith, who has authored four laws promoting democracy in Eastern Europe, has a notable reputation for personally intervening to help those endangered by Russian aggression in the region.

When Russia invaded Georgia in 2008, Smith helped secure the safe return of two young girls from his congressional district and several others stuck behind enemy lines.