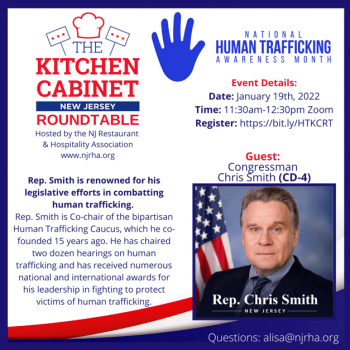 The Kitchen Cabinet legislative roundtable series is an ongoing grassroots effort, spearheaded by NJRHA, that promotes effective engagement and discussion among businesses and public officials within their district.

“Recognizing January as National Human Trafficking Prevention Month is important to the New Jersey Restaurant & Hospitality Association,” said NJRHA President and CEO Dana Lancellotti. “Our industry, especially our hoteliers, have worked alongside the government and elected officials to provide educational resources to their employees to help combat and prevent this crime.”

Members of New Jersey’s hospitality industry participated in the recent Kitchen Cabinet program with Congressman Smith, who is renowned for his legislative efforts in combatting human trafficking.

“Congressman Smith provided our members with a thorough update on his legislative efforts that will continue to help prevent this heinous crime,” said Lancellotti. “We want to thank him for being a tireless advocate for those impacted by human trafficking and for enhancing criminal penalties against those who commit this crime.”

Congressman Smith authored the nation’s landmark Trafficking Victims Protection Act of 2000 — the comprehensive, historic law designed to prevent modern-day slavery, protect victims, and enhance civil and criminal penalties against traffickers both within the United States and around the world.

He has authored four additional anti-trafficking laws including International Megan’s Law to establish a system of notification to protect children from convicted pedophiles who may seek to travel to abuse children—which has resulted in nearly 6,000 denials of international travel by known pedophiles to date.

Smith is co-chair of the bipartisan Human Trafficking Caucus, which he co-founded 15 years ago. He has chaired two dozen hearings on human trafficking and has received numerous national and international awards for his leadership in fighting to protect victims of human trafficking, who are mostly women and children.