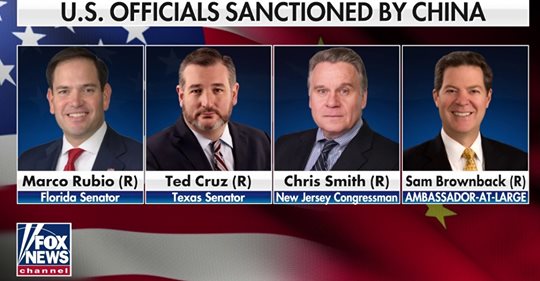 Rep. Chris Smith (R-NJ), an internationally recognized American human rights lawmaker, said the “proximate cause” of the sanction against him appears to be his authorship of the Uyghur Human Rights Policy Act.

“In my remarks on the floor of the House during debate, I underscored the fact that President Xi Jinping is directly responsible for the genocide against the Muslims.”

“We must continue to stand with the Chinese people against an increasingly authoritarian Chinese government that represses legitimate desires for liberty and justice.”

According to the Associated Press,  “China said Monday it will impose sanctions on three U.S. lawmakers and one ambassador in response to similar actions taken by the U.S. last week against Chinese officials over alleged human rights abuses against Muslims in the Xinjiang region.”

“U.S. Senators Marco Rubio and Ted Cruz, Rep. Chris Smith and Ambassador for Religious Freedom Sam Brownback were targeted…Foreign ministry spokesperson Hua Chunying said the U.S. move had “seriously damaged China-U.S. relations” and that China was determined to uphold its national sovereignty against what it sees as interference in its internal affairs.”

In mid-May, the Chinese government through its propaganda organ the Global Times  had threatened Smith with “pain” for authoring the Hong Kong Human Rights and Democracy Act and the Uyghur Human Rights Policy Act.

The Chinese government also objected to Smith bill, the Compensation for the Victims of State Misrepresentations to the World Health Organization Act of 2020  which will waive the Foreign Immunities Act to legally empower U.S. citizens to sue the government of China for monetary damages, “for personal injury or death, or damage to or loss of property, occurring in the United States as a result of a willful or grossly negligent misrepresentation of information to the World Health Organization.”

The Global Times article continued, “Smith has also been a frequent instigator on China-related topics, particularly on so-called human rights issues. In March 2019, Smith introduced legislation to tackle China’s political influence in the US by saying ‘Beijing’s influence operations are sophisticated and threatening.  China won’t just strike back symbolically but will impose countermeasures that will make them feel the pain, analysts said.”

Smith said, “Two weeks ago, I was briefed by the FBI that the threat was real and the CCP’s action could take many forms, from bribes to social media disinformation and worse and for starters–visa denial–today’s sanction. When COVID-19 abates, I was/am planning a trip to Hong Kong, Beijing and to Urumqi, the capital of Xinjiang.”

“In 2006, my work computers were hacked by the Chinese government. According to the House tech experts, they took what was on my computer as well as my human rights committee computers. In 2006, I chaired a landmark hearing focused on the complicity of Google, Yahoo, Cisco and Microsoft in Beijing’s censorship, surveillance, arrest and jailing of human rights and democracy activists.”

Smith has chaired more than 60 congressional hearings on Chinese human rights abuses, from China’s “soft power” use of Confucius Institutes, to NYU and other institutions of higher learning being given unimaginable deals, the pervasive use of forced abortion, coerced sterilization, torture, religious persecution, laogai labor, and organ harvesting.