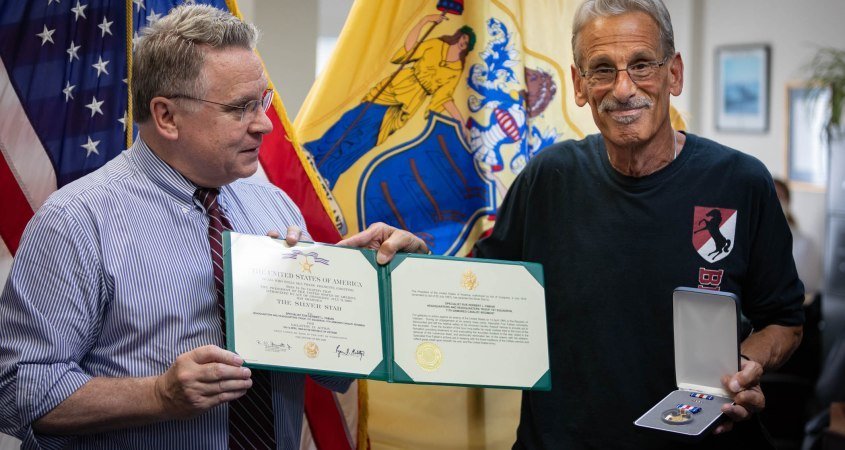 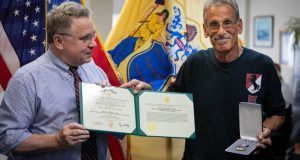 This is the second Silver Star awarded to “Doc” Fabian, a highly decorated veteran who received his first Silver Star for his heroism during an ambush by the North Vietnamese on January 11, 1969. He has previously been awarded two Bronze Stars, two Purple Hearts, and an Army Commendation Medal (ACM) with Valor.

“Bart ‘Doc’ Fabian is a hero for all ages, earning the Silver Star not once, but twice. He routinely went above and beyond the call, protecting injured soldiers who were under attack,” Smith said. “Mr. Fabian’s actions on April 13, 1969, which account for the second Silver Star, are truly courageous, heroic and the mark of a natural leader.”

Smith added, “How does a man under gunfire find that kind of grit to do something absolutely astonishing? We are talking about a man who put his own life at risk—repeatedly—to defend injured soldiers who were being targeted by the enemy. The record shows that Doc Fabian saved 10 U.S. soldiers, and stopped two soldiers who were trying to kill wounded GIs. In an era when people admire fictional superheroes and Hollywood stars portraying heroes, Doc Fabian is a genuine uncontested hero.”

After over two years of Smith working with the Army, the Secretary of the Army Ryan D. McCarthy ordered Fabian be recognized “For gallantry in action against an armed enemy of the United States” while serving in his outfit, Troop A, 1st Squadron, 11th Armored Calvary Regiment, II Field Force Vietnam.

Recounting that fateful April day, Mr. Fabian said the battle raged on for an hour and a half. He lost six from his troop, including one of his closest buddies, and 19 in total, including the other medic. “We got beat up pretty bad that day,” Mr. Fabian said. “It was a bad day for the good guys.”

The day after the battle, his commander said he would be recommended for the Silver Star. But it never came. “I decided to forget about it,” he said. “I didn’t want to promote myself. It was a bad day. The next day we were right back in it.” That changed in 2018 at a reunion with fellow veterans who urged him to seek the medal.

The Silver Star is awarded to a person who, while serving in the U.S. Army, is cited for gallantry in action against an enemy of the United States while engaged in military operations involving conflict with an opposing foreign force. The required gallantry must have been performed with marked distinction.

Members of the awards board unanimously recommended approval, some making handwritten notations of Mr. Fabian’s actions.

Wrote Lt. Gen. John W. Woodmansee Jr., who also saw combat in Vietnam, “‘Doc’ Fabian joins the illustrious list of medics who risk their lives saving others. …The award of the Silver Star is certainly deserved. …On 13 April 1969 he saved numerous lives in the middle of a battle… an incredible display of courage and competence. When we sing the National Anthem, we are singing about those ‘Doc’ Fabians in our ranks.”

Brig. Gen John W. Nicholson (RET) said, “He treated more than 10 wounded soldiers and recovered them and their KIA buddies. He voluntarily performed these heroic and life-saving actions while 19 fellow U.S. soldiers were killed in the same action. …His bravery was fearless, determined and voluntary, despite desperate odds… I highly recommend approval of this award.”

Lt. Gen. Thomas Griffin determined that Mr. Fabian’s “action on 13 April 1969 absolutely meet the standard for this award… His repeated exposure to enemy fire while rescuing his fellow soldiers—and engaging the enemy—over a long period of time—are well above the call of duty. I wholeheartedly recommended approval!”

Said Maj. Gen. Leroy Newton Suddath Jr. (RET), “This is the best documentation I have ever seen.”

Another medal in ‘Doc’ Fabian’s future?

“Perhaps we are not finished honoring the life and heroic acts of Doc Fabian,” Smith said, noting several of the general officers who reviewed and approved the Silver Star for the 13 April 1969 action, felt he might be entitled to an even higher medal. “Two of the general officers suggested he might be deserving of the Distinguished Service Cross. Without a doubt, his actions were extraordinary heroism.”