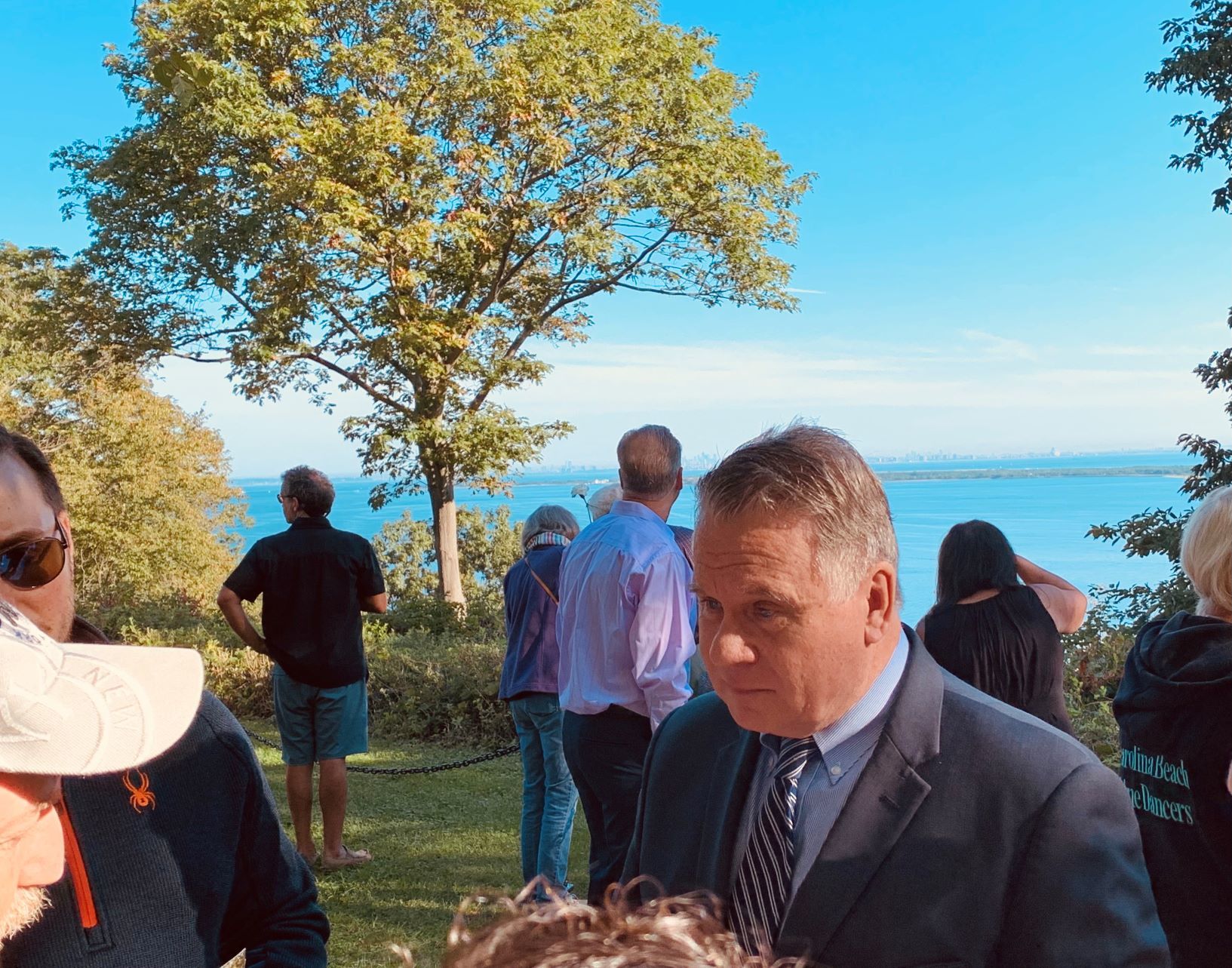 This morning Rep. Smith spoke with family members and friends of those who perished on 9/11 during Monmouth County’s September 11 Memorial Ceremony at Mount Mitchill Scenic Overlook where the Manhattan skyline can be seen in the distance.

The loss of life twenty years ago today, including 147 individuals from Monmouth County, and the profound courage displayed by first responders who risked their own lives to save others will never be forgotten.

Everyone remembers where they were and what they were doing—I was in Washington chairing a Veteran’s Affairs Committee hearing—when a group of radical jihadists hijacked 4 airliners to perpetrate the worst act of terrorism in American history.

Today—20 years later—we remember the horror and pain suffered by those who were murdered—147 from Monmouth County alone—and the anguish felt by their families and friends both then and now.

Who can forget the courageous first responders running up the stairs of the burning buildings—with total disregard for their own safety—saving some at the expense of their own lives?

Both then and now these courageous men and women have paid a huge price.

According to the Victims Compensation Fund’s 20th Anniversary Special Report : “In the decades since 9/11, tens of thousands of responders and survivors have become sick or died because of their exposure… It is also sobering to see that more people are now believed to have died of 9/11-related illnesses than were lost on September 11, 2001.” As of June 30th, 4,627 are deceased.

According to the World Trade Center Health Program, more responders and survivors today live in my congressional district than any other in New Jersey.

Everyone pulled together that day—and in the days that followed.

According to a NJ.com story “The great boat lift of 9/11, the unsung story how hundreds of thousands were rescued that day: “caught between the river and a scene of Armageddon, salvation came in the form of a waterborne rescue, called the largest maritime evacuation in modern history…  Members of the Coast Guard and the Sandy Hook Pilots served in effect as air traffic control, using their knowledge of the harbor to direct vessels to designated pickup spots deep enough for each boat’s draft.”

The Great Boat lift of 9/11 evacuated nearly half a million people in nine hours, an extraordinary feat of the human spirit coming together when faced with the most dire adversity

On the morning of 9/11, I got a mere glimpse into the sense of horror suffered by the victim’s families when I couldn’t reach my own brother Tom—an American Airlines 757 Captain who often piloted Flight 11 from Logan to LA, the flight that crashed into the North Tower.

Evacuated from the Capitol and stuck in traffic within sight of the burning Pentagon, cell phones were all but gridlocked. About noon I got through.  He and his flight attendant wife Sandy were safe but were in tears because they knew the pilots and crew on board Flight 11.

Because 9/11 was a surprise attack, there was no chance to fight back that day although when Todd Beamer and other passengers learned what happened to the Twin Towers, Todd famously said, “let’s roll” and they attacked the terrorists on board the flight that crashed in a Pennsylvania field.

As we all know, the war in Afghanistan was designed and prosecuted to mitigate terrorism at its source.  Many brave Americans died or were wounded, and we are eternally grateful for their sacrifice.