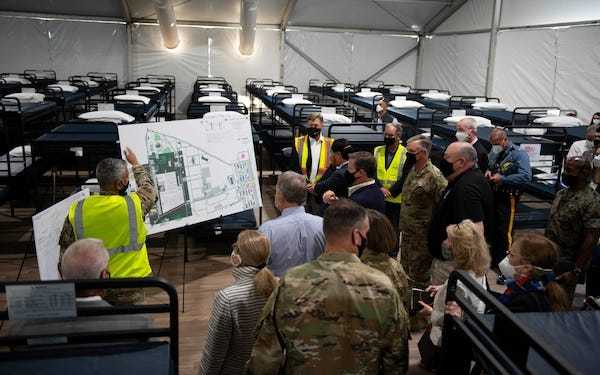 JOINT BASE MCGUIRE-DIX-LAKEHURST – A New Jersey congressman says many questions remain unanswered about the vetting process of Afghan refugees housed here after touring the base Thursday.

U.S. Rep. Chris Smith, a Republican whose 4th district includes Joint Base McGuire-Dix-Lakehurst, toured the base with Gov. Phil Murphy and other members of the New Jersey congressional delegation for a high-level briefing by U.S. Northern Command Commander Gen. Glen VanHerck.

Following the tour, Smith stressed the importance of ensuring a comprehensive vetting process.

“In welcoming Afghan evacuees to the U.S. — and out of abundance of respect and concern for all Americans as well as genuine refugees — it remains absolutely essential that comprehensive and effective vetting occurs to ensure that no terrorist surreptitiously slips into any American community,” said Smith in a news release.

At the base, members of the state legislature were told an extensive vetting process and biometric screening was employed prior to Afghan refugees arriving at the Joint Base.

Additionally, Smith thanked the leadership of U.S. Air Force Gen. Mark Camerer the commander of Joint Task Force Liberty as well as its men and women at the base for their assistance in relocating and offering temporary housing, food, and medical care to refugees.

“I believe that there is a both compelling need and moral obligation to provide immediate safe haven and humanitarian aid to those who have fled the unspeakable cruelty, violence, and terrorism perpetrated by the Taliban and ISIS-K,” said Smith.

The congressman, though, says reliable information on Afghan refugees is hard to come by.

“We need to know more. Reliable background information on Afghan evacuees — including fingerprints, cross checking terror watch lists and public records — on many if not most simply doesn’t exist and if such information did, is likely neither available or retrievable,” said Smith.

Smith pointed to the case of Agron Abdullah, one of nearly 4,400 people brought to the base in 1999 from the Stenkovec refugee camp in Macedonia during the Kosovo war. Abdullah was arrested years later and imprisoned in 2008 for supplying weapons to the Fort Dix 5, a group of men convicted of plotting to kill American soldiers at Fort Dix.

“Despite the vetting process used then, he was missed. We cannot allow another such failure to happen again,” said Smith.

As the vetting process continues, Smith says questions surrounding how many Afghan refugees have been “screened out” thus far due to their past and what country will accept them remain unanswered.

It is expected that the base will house 13,000 Afghan evacuees.

Despite questions still looming around their resettlement, Smith praises New Jersey residents and organizations for their warm welcome of refugees.

“New Jersey residents, families and NGOs are showing deep compassion and empathy by reaching out to offer generous donations and supplies,” said Smith.