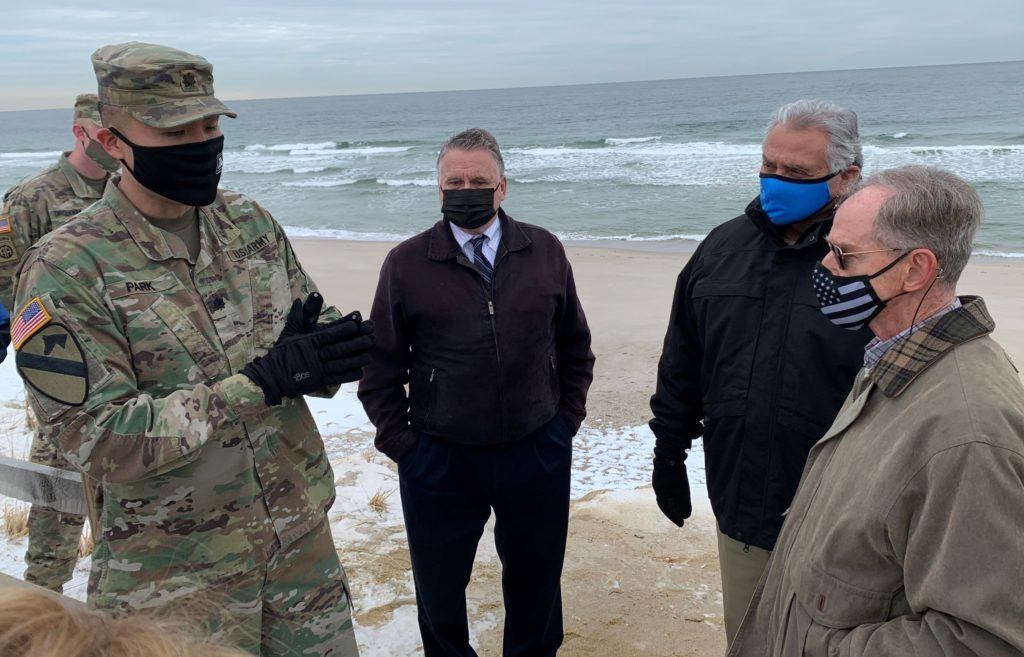 Congressman Chris Smith met on the dunes in Bay Head on Friday with officials from the Army Corp of Engineers, the NJ Department of Environmental Protection and local leaders from Bay Head and Ocean County to address the 18 foot cliff that developed as a result of Winter Storm Orlena.

Smith organized the meeting with Lt Col David Park, Commander of the U.S. Army Corp of Engineers Philadelphia Region and William Dixon, Director of the NJDEP Division of Coastal Engineering, after receiving an urgent plea from Bay Head Mayor Bill Curtis, to address the safety concerns created by the steep drop from the dunes.

“The safety and security of Bay Head’s residents and the surrounding community must be paramount.  We can’t leave these 18-foot cliffs exposed,” Smith said.

The Army Corp had initially determined that Winter Storm Orlena was not an emergency event that would trigger their immediate response. As a result of the meeting on Friday, which included members of the Bay Head Council, Ocean County Commissioner Joe Vicari and Assemblymen Greg McGuckin and John Catalano, commitments were made by the Army Corp and NJDEP to “both immediately address the safety concerns and to explore sustainable longer-term actions to mitigate beach erosion posed by future storms,” said Smith.

“Congressman Chris Smith came to the aid of Bay Head, again, when we needed him most,” Curtis said. “At our request, he convinced Lt. Colonel Park to travel to Bay Head to assess the damage to our beaches. Congressman Smith has always acted quickly, spoken decisively yet courteously to get things done that I could not accomplish without his intervention.”