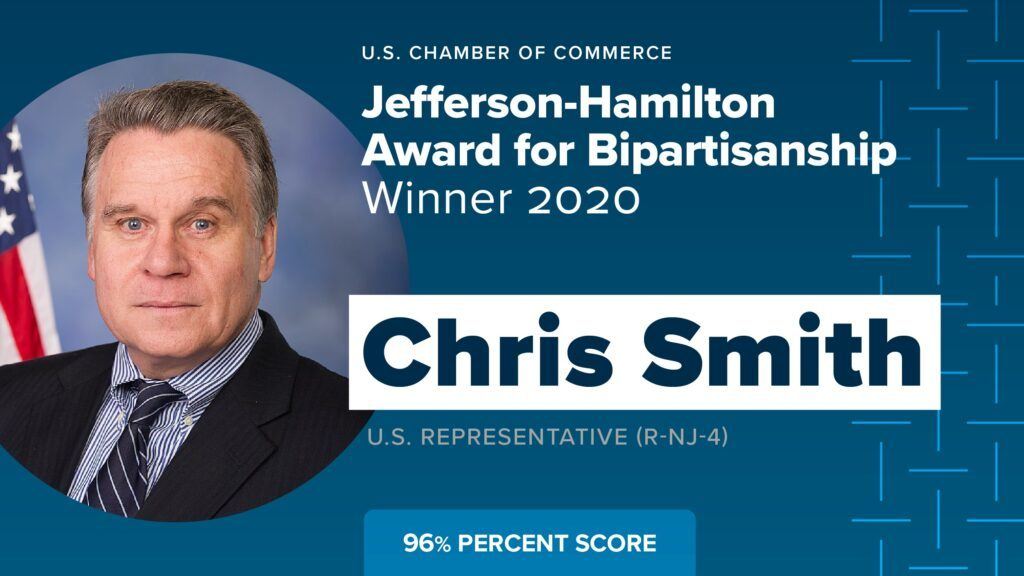 WASHINGTON, DC – Congressman Chris Smith (R-NJ) was once again recognized for his leadership as one of the most bipartisan Members of Congress, as the U.S. Chamber of Commerce (USCOC) released its inaugural “Jefferson-Hamilton Award for Bipartisanship,” citing Smith’s work during the first half of the 116th Congress (2019-2020) at the Chamber’s virtual “Governing with Distinction Ceremony” held today.

Chamber Vice President Jack Howard said that with the country facing unprecedented challenges—including a global pandemic, an economic crisis that has put 40 million Americans out of work, and as well inequality and injustice in society—the country stands at a crossroads and needs to get to work building consensus and solving the great challenges facing the nation.

“Many are looking to our nation’s government and elected leaders for answers during this time,” Howard said. “We need pragmatic political leaders who have the courage to solve huge business and economic growth issues through common sense solutions built from a durable political center, not ideological corners.”

The Chamber said the awards are intended to emphasize bipartisanship and leadership, and “recognize those members of Congress who in their actions have demonstrated a willingness to work across the aisle in support of common objectives.”

“I am pleased to be listed in the top five percent,” said Smith, who scored a 96 out of 100 on the USCOC rating. “I have long felt that bipartisanship is about respect for other people even when there are fundamental disagreements. Bipartisanship is not an end unto itself, but can be a practical, good faith way of understanding different views in order to achieve fair, equitable and sustainable solutions to problems. More often than not, bipartisanship helps build support and consensus for effective policies. I have looked to find areas of agreement for my entire time in the people’s House. Then I work with like-minded colleagues to get the job done, to get a bill over the finish line.”

The Jefferson-Hamilton Award is presented to the 20 top members of Congress, apportioned by party, based on the number of bills a Member cosponsors introduced by a Member of the opposite party.

Smith, who has the second most bills enacted into law than among all of the sitting 435 members of the House, is known for working on other side of the aisle to pass laws to protect the vulnerable, especially women and children, veterans and others in need.

Only last month, Smith was named in the top 10 most bipartisan members in the House of Representatives by Georgetown University’s Lugar Center and McCourt School of Public Policy which jointly released their new Bipartisan Index rankings of members of the current 116th Congress.  The non-partisan tool measures the degree to which  Representatives work across party lines on legislation.

“Congratulations—It is my pleasure to inform you that you have earned the U.S. Chamber of Commerce’s first ever Jefferson-Hamilton Award for Bipartisanship for your work during the first part of the 116th Congress,” Howard said in a letter to Smith and other recipients.