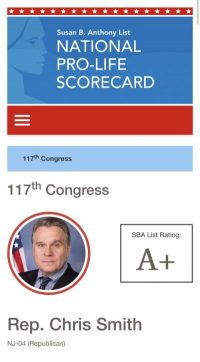 Rep Chris Smith believes the right to life is the foundation upon which all other rights are based, and his work in Congress shows that. The Susan B. Anthony List has given Chris an A+ on their pro-life scorecard.

Congressman Smith has stood up against the pro-abortion agenda of the Biden-Harris administration and Pelosi Democrats who are actively working to expand abortion access and abortion funding. Rep. Smith has voted consistently to defend the lives of the unborn and infants. This includes stopping hard-earned tax dollars from paying for abortion, whether domestically or internationally, and protecting health care provider rights for those who refuse to engage in brutal abortions.

Congressman Smith chairs the House Pro-Life Caucus and has introduced many pro-life bills, such as H.R. 18, the No Taxpayer Funding for Abortion and Abortion Full Disclosure Act; H.R. 1080; the Pain-Capable Unborn Child Protection Act; H.R. 648, the Informed Consent Act; and H.R. 3542, the Human-Animal Chimera Prohibition Act. He has also co-led the following pro-life congressional letters: an appropriations request letter to retain longstanding pro-life protections; two letters to the Biden-Harris administration and the Appropriations committee respectively in favor of the Protecting Life in Global Health Assistance (PLGHA) policy; a bicameral letter to NIH expressing concern with human-animal chimera research; a letter to Veterans Affairs Secretary Denis McDonough calling on him to recognize current prohibitions for abortion funding through the VA; and a letter opposing anti-life provisions in President Biden’s FY2022 budget proposal. Rep. Smith offered amendments to the State and Foreign Operations funding bill to restore the Helms Amendment, which prohibits federal taxpayer funding for abortion as a method of family planning overseas, and to remove the proposed language barring future pro-life presidents from enacting the PLGHA. He offered an amendment to the consolidated spending bill that would restore his longstanding pro-life amendment that limits taxpayer funding for abortion for federal employees. Along with the Mississippi delegation, Rep. Smith co-led the pro-life congressional amicus brief for the Dobbs v. Jackson Women’s Health Organization, in which the Court will assess whether pre-viability limits on abortion are constitutional. He gave speech defending life at a special order hour on the day of the Dobbs Supreme Court oral argument and spoke outside the Supreme Court at the pro-life rally during the oral arguments. Additionally, Rep. Smith spoke on the House Floor and at a roundtable with pro-life leaders exposing abortion funding in H.R. 5376 (BBB).