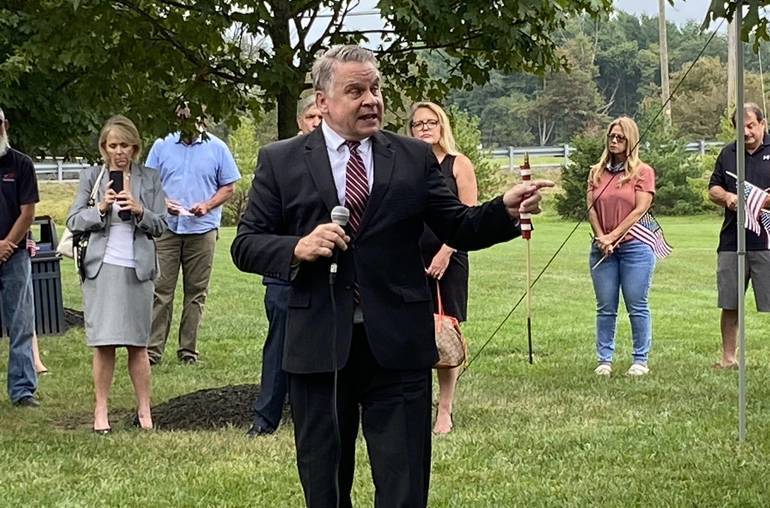 By ELIZABETH A MEYERS

HAMILTON – ROBBINSVILLE, NJ — It’s the end of an era of sorts for Congressman Chris Smith (NJ-4) who has represented Hamilton and Robbinsville Townships in Congress for 40 years. According to the newly released map of New Jersey’s Congressional Districts, set to go into effect for the 2022 election, the two Mercer County towns will be part the reconfigured Third District.

Smith spoke with TAPinto Hamilton/Robbinsville Wednesday night after the map was made public, sharing his next steps and feelings about representing the district he has served since 1981.

“When my wife and I were married early on, we chose to make Hamilton our home right in Victoria Apartments on Estates Boulevard, so we are sad to lose these towns. But, we are moving with the District,” said Smith who has decided to relocate his home. “I fought very hard to keep Mercer County, and I am disappointed to not have Hamilton and Robbinsville in the district anymore.”

The Fourth Congressional District will now be primarily comprised of towns in Monmouth and Ocean Counties.

Smith estimates that 72 percent of the District will remain in-tact.  He said the number goes up to about 80 percent when adding in Brick Township which he represented in previous iterations of the congressional map.

Smith said that he had a sense that a change to remove the Mercer County towns was going to happen during the redistricting process and spoke with the republican commissioners as recently as last week to plead his case.

“This was supposed to be a transparent process but in the end it was not,” Smith claimed. “I don’t believe anything illegal happened. But, for the sake of good governance, more transparency should have happened.”

Smith said that he will be moving out of Hamilton and into a new home, exactly where is to be determined, before the November election.

“Folks have run before me in the past who do not live in the district before the Election and I just don’t agree with that,’ said Smith. “I don’t believe you should run in a district where you don’t live so we will move in time.”

Smith said that he had spent much of Wednesday talking to political leaders in the District who expressed support for his re-election bid. He expressed confidence that he would be re-elected to serve in Congress.

Asked if he thought that the Republican Party could take control of the U.S. House of Representatives after the 2022 elections, Smith said “there is a possibility” but would not bet on it. He believes the large number of retirements of current members of congress could play a part in that outcome.

“It is my hope that more civility can return to Washington,” Smith added.

As far as who will represent Hamilton and Robbinsville Townships — the towns will now be part of the Third Congressional District which is currently represented by Congressman Andy Kim (NJ-3), a Democrat from Burlington County.