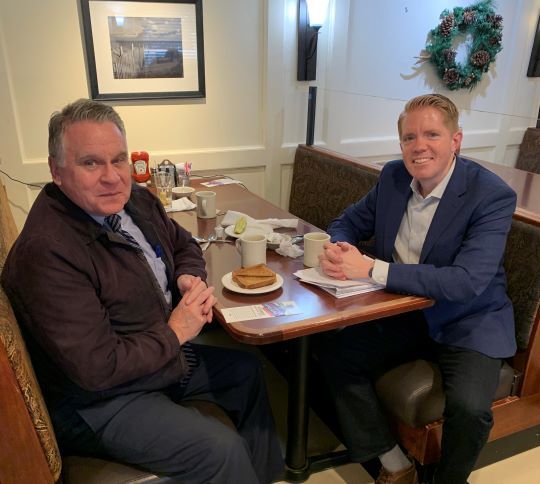 “A Better America has always been the battle cry of my campaign—that our nation would renew our spirit of civility, stand by our convictions, and dedicate ourselves to the common good,” said Hyland, “Congressman Smith has a record that embodies those values. I’m concluding my campaign for Congress, but continuing my fight for a better America alongside Chris Smith, who I’m proud to endorse.”

This announcement comes after New Jersey’s Congressional Redistricting Committee released maps that moved Hyland from District 3 to District 4 with Smith. “I announced my campaign in October because I didn’t believe incumbent Congressman Andy Kim of the far-left Progressive Caucus was the right representative for us. I ran this campaign from day one committed to be that conservative, principled option for New Jerseyans that we were rarely seeing on the ballot.

“Americans are growing tired of divisive rhetoric and radical politics,” Hyland noted, “we’re concerned that the fabric that is holding us together is beginning to tear, that a day will come where we don’t see each other as both Americans and neighbors, but as untrustworthy political opponents with no shared culture.”

In his endorsement of one of New Jersey’s most effective representatives, Hyland said, “Congressman Chris Smith embodies the core values of A Better America—civility, conviction, and the common good. I cannot in good conscience campaign for a better America knowing I would be challenging a congressman who practices those ideals in the halls of Congress each day. My congressional run was never about Shawn Hyland, it was always about A Better America. Smith is like minded with me and shares the same heartbeat on social issues.”

Congressman Smith commented, “I am grateful to have the endorsement of Shawn Hyland today. It is an honor and privilege to stand in solidarity with him in the noble and necessary cause of restoring America. However, this won’t become a reality by merely wishing it so. Shawn and I know that. We know that it takes faith and trust in God, persevering and unceasing prayer, lots of hard work and a vision grounded in righteousness and mercy.”

Hyland said he would like supporters to know that he is still fighting for A Better America and will be campaigning for Smith in 2022, “I ran to be a relentless voice for a better America – one with stronger families, safer neighborhoods, better schools, and more economic growth.

“I want to thank all of my supporters who believed in me and what we would do together in 2022 and beyond. I hope my supporters will come out and give Congressman Smith the same support they have already shown me.”