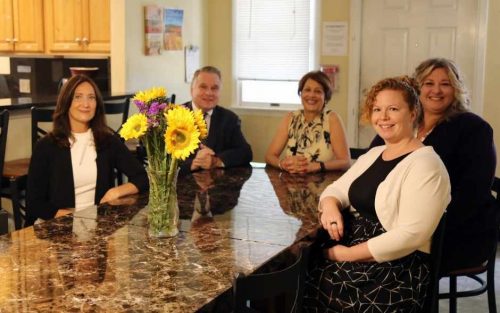 When discerning which projects to bring to the forefront for inclusion in a recent congressional spending bill, U.S. Rep Chris Smith (R-NJ) knew immediately that there was one within the Diocese of Trenton that would be at the top of his list: Providence House Domestic Violence Services of Catholic Charities in Ocean County.

The mission of Providence House, which serves people of all faiths, is to provide shelter and care for victims of domestic violence, and “to remove the barriers that prevent a victim of domestic violence from living an abuse-free life.” While this has always been a response to an ever-urgent need of the vulnerable, this urgency grew dramatically as the scourge of domestic violence increased during the COVID-19 pandemic.

Smith, who hails from the Diocese of Trenton and is a member of St. Elizabeth Ann Seton Parish, Whiting, noted that, in deciding which causes to champion, “the toughest part is figuring out, over a number of laudable initiatives, which to support. That’s the hardest part. Providence House was right up there,” he said during an Aug. 3 visit to the Ocean County site.

Due to Smith’s work and support, Providence House is set to receive $750,000 in federal funding, as the bill which directs these funds recently received approval by the House Appropriations Committee.  This approval was a crucial step toward Providence House receiving the financial support vital to the expansion of the size of the residence and making necessary renovations, a need which has been prompted by the great increase in the number of people who are in desperate need of the shelter and solace it provides.

In a recent meeting between the congressman and the staff of Providence House and Catholic Charities, Mary Pettrow, service area director for Children and Families for Catholic Charities, noted that prior to the pandemic, the maximum number of clients in residence was 27.

As of the beginning of August, the number of clients being served by Providence House has risen more than four times that number to 115.  This reality has forced staff to find alternate housing for the people coming to them for help, which means that many of the individuals they serve are residing in nearly 60 hotels scattered throughout four counties instead of in the residence itself.

Susan Loughery, associate executive director of operations for Catholic Charities, cited another major problem they are facing: “Programs like Providence House are getting hit hardest due to inflation, which creates a domino effect.”

For example, the cost of gas, which normally would not present a concern for staff, has now added a considerable burden, as they must drive to multiple hotels to care for clients.  But the issues that arise from the need to find alternate housing for clients are not confined to the practical; the loss of vital benefits of living in community, especially with others sharing the same difficult journey, is sorely felt.Danielle Meyer, Providence House program director, mentioned that “This is the time of year we would have been trying to give kids camps and positive experiences, but so many being in the hotels makes it very difficult to do this.”

Pettrow also spoke of the isolation and anxiety felt by their vulnerable and at-risk clients residing in the hotels, as they are removed from the physical space of Providence House, and the safety and security which are its hallmarks.

These concerns, ranging from the practical to the emotional to the spiritual, speak to the importance Catholic Charities places on caring for the whole person.

As Marlene Laó-Collins, executive director of Catholic Charities, stated, “We have an array of services – behavioral health services, homelessness prevention – and we try to work with people holistically, to respond to the variety of needs.”

As Providence House and Catholic Charities staff spoke of the serious challenges, they face in trying to provide care for vulnerable people such as those seeking shelter at Providence House, they also expressed gratitude to Smith for his steadfast advocacy for those in need, and for championing the funding which will truly change the lives of those they serve.

In turn, Smith expressed his admiration for diocesan organizations that serve those who are most in need.

“Nobody does it better than Catholic Charities,” the congressman said. “They are the best of the best, people who truly radiate the love of Christ.”